Tim Storey is currently filming for another CLVLND DVD titled “AH Well” This video is the clips filmed in the past 6 months that wont be used.

The video will be out mid next year and will be free for anyone after a copy. Based off these clips it looks like it will be a good watch.

Back with more gold from the crew’s Instagram accounts.

Aaron Simone who rides for Tony’s Bikes over on the East coast of the USA banged out this DIG video with Chris Bracamonte whilst he was in California for a few weeks which came out great. Love the 360 over the rail…

Hey guys, I have been working on my ankle a lot . I am doing my own physio to save money and I think I know how to treat it pretty good aswell.. I’m learning a lot about the body and healing myself. It’s pretty interesting. I am Constantly progressing, Healing and feeling more and more stronger everyday, With my ankle and my whole body . .. I am able to do pretty much any Physical activities with out to much pain or hassle in my ankle now.. Which is very relieving and exciting. I have been climbing mountain for physio etc.

This ankle has been by far the hardest injury to recover from. I Keep thinking It’s getting better then I find another thing I have to heal . It’s just my balance i am having a hard time with at the moment. . That’s delaying the last healing process.. I am able to ride, do all my usual tricks, But not comfortably. and don’t feel like it’s time yet. I have subconsciously been putting all my weight on my left leg, ( My good foot ) During pretty much every activity i do, Including riding…. so This is delaying my Right ankle ( the one i Broke ) From fully healing and building that last bit of muscle I need to be able to have a lil fall and get back up from it… I have just figured this out this week. So it’s exciting I can start working towards balancing my weight out on both feet, and should be back to 100% soon. All the physio and exercise I have been doing my whole body and mind is ready and just waiting to push the limits again. Yoga has been a huge help to balance myself out. I am feeling really confident and refreshed on my bike so I’m super excited and have fallen more involve with riding once again!

It’s been a long road but I think it’s finally coming to a end. And I am so grateful for this Obstacle, and I have learnt a whole lot that is going to help me in the future to be on my bike for as long as possible.

Below is a day edit from the England trip hitting up the Corby park.

Over in New Zealand, Liam Marshall just set up a fresh new bike that’s looking on point. Check the parts list below. 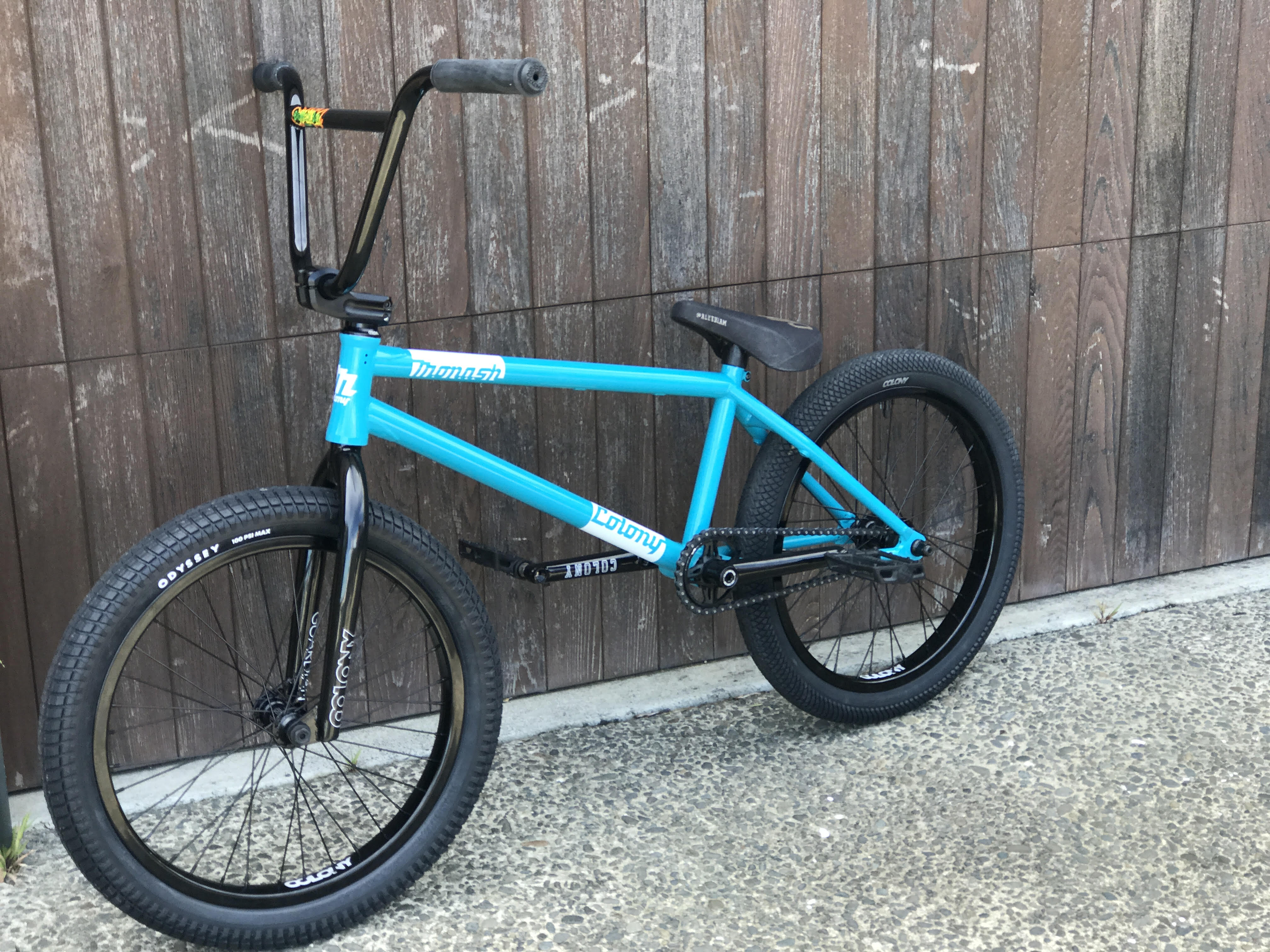 Another episode of the Redbull and friends trip around New Zealand. Victor has some good clips throughout and the places they rode look super good. You can see a tonne of photos right here and the video below.

Chris Bracamonte knows how to handle a long rail or 6! Watch him do just that in this new video whilst we give you a run down of his current Tradition set-up.

Thanks to The Merged for including us in their top 5 BMX Pedals feature with the Fantastic PLastics. Check it here. Last night was a great time with a tonne of crew. Thanks to YVC and Vans for helping put it on and to everyone that came out. 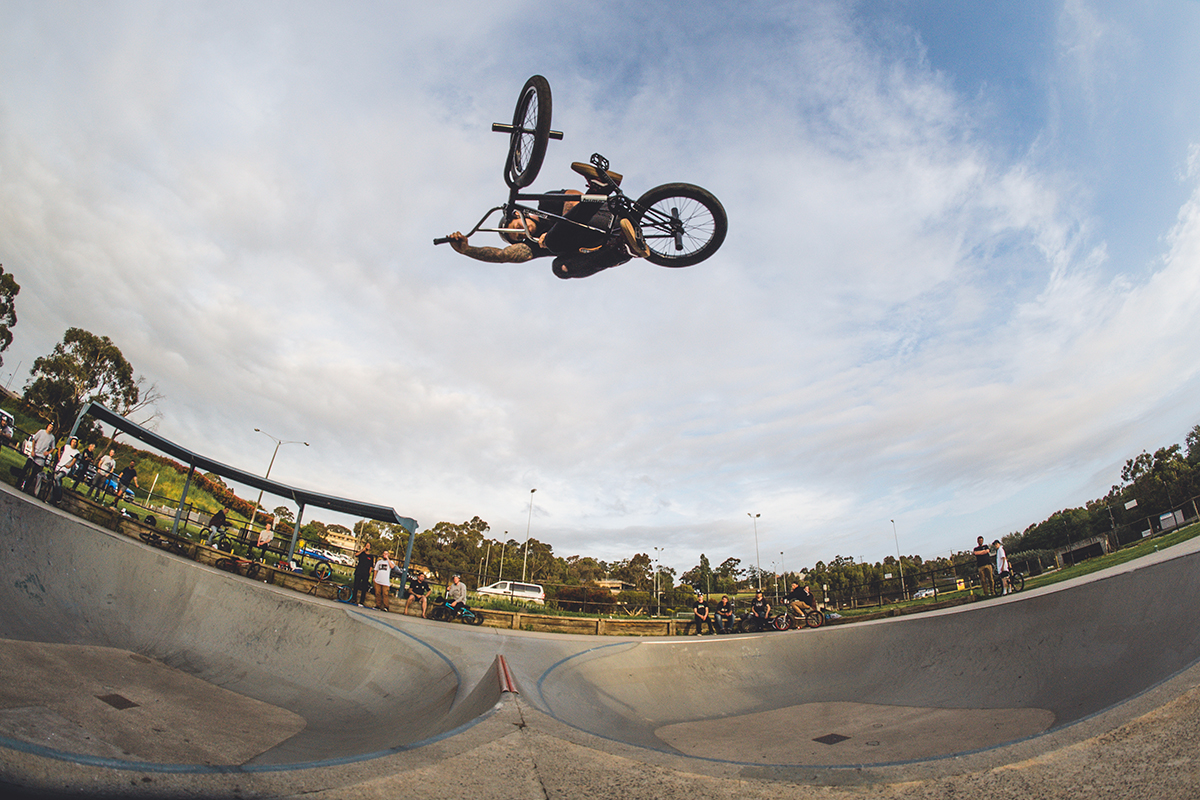 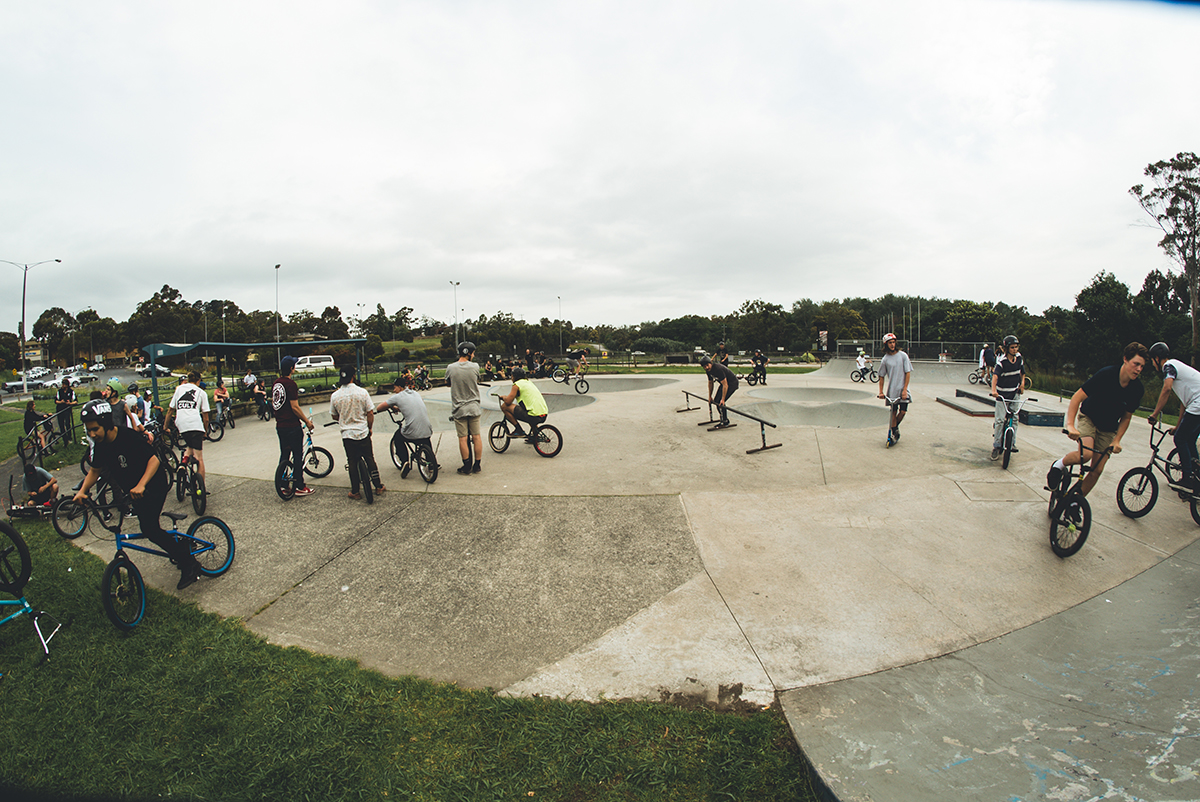 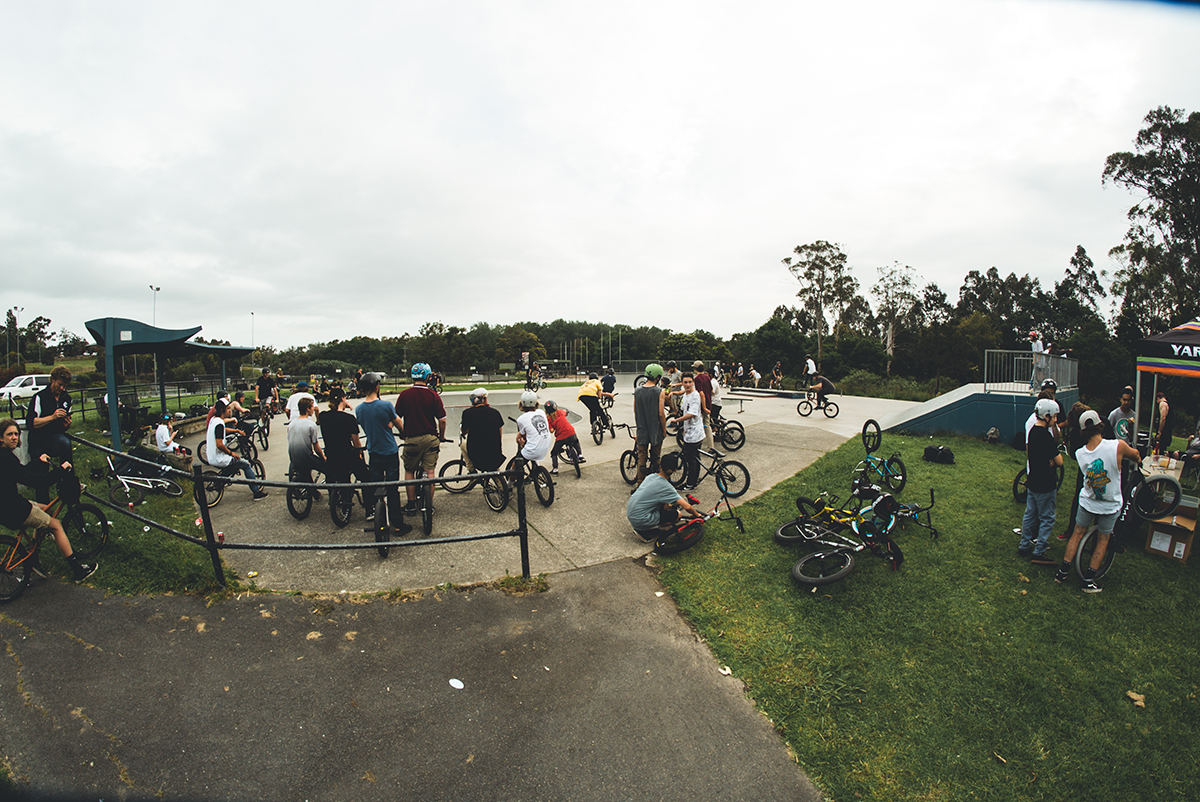 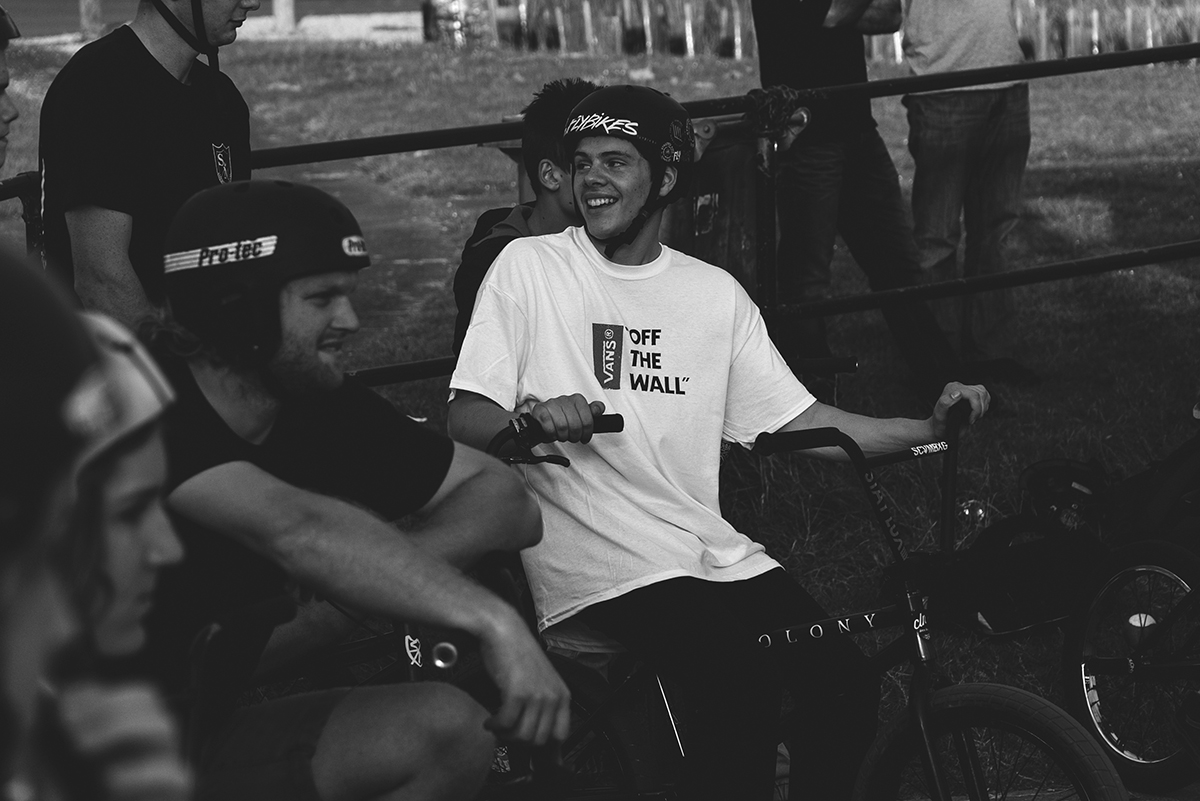 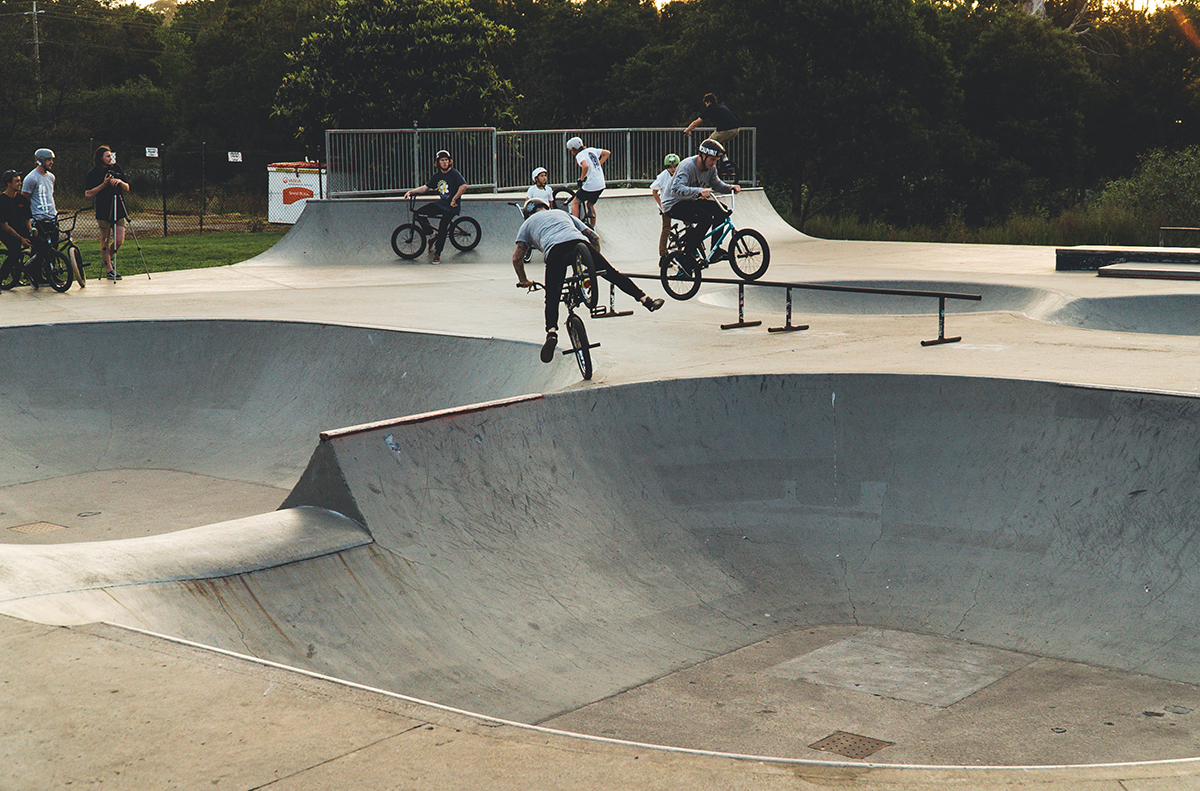 Sooooooo I have a new bike and it fucking rules. I’m still very cautious and shaky on it but I am loving just being able to roll around.

Again I can’t thank Clint and everyone at Colony enough for all the support for so long. Soon I will be riding with my people again….poorly….but I’ll be riding and I can’t freaking wait.

Just thought you guys should know. Check out my rig. This Versatil frame is seriously the tits. It feels incredible and looks even better. 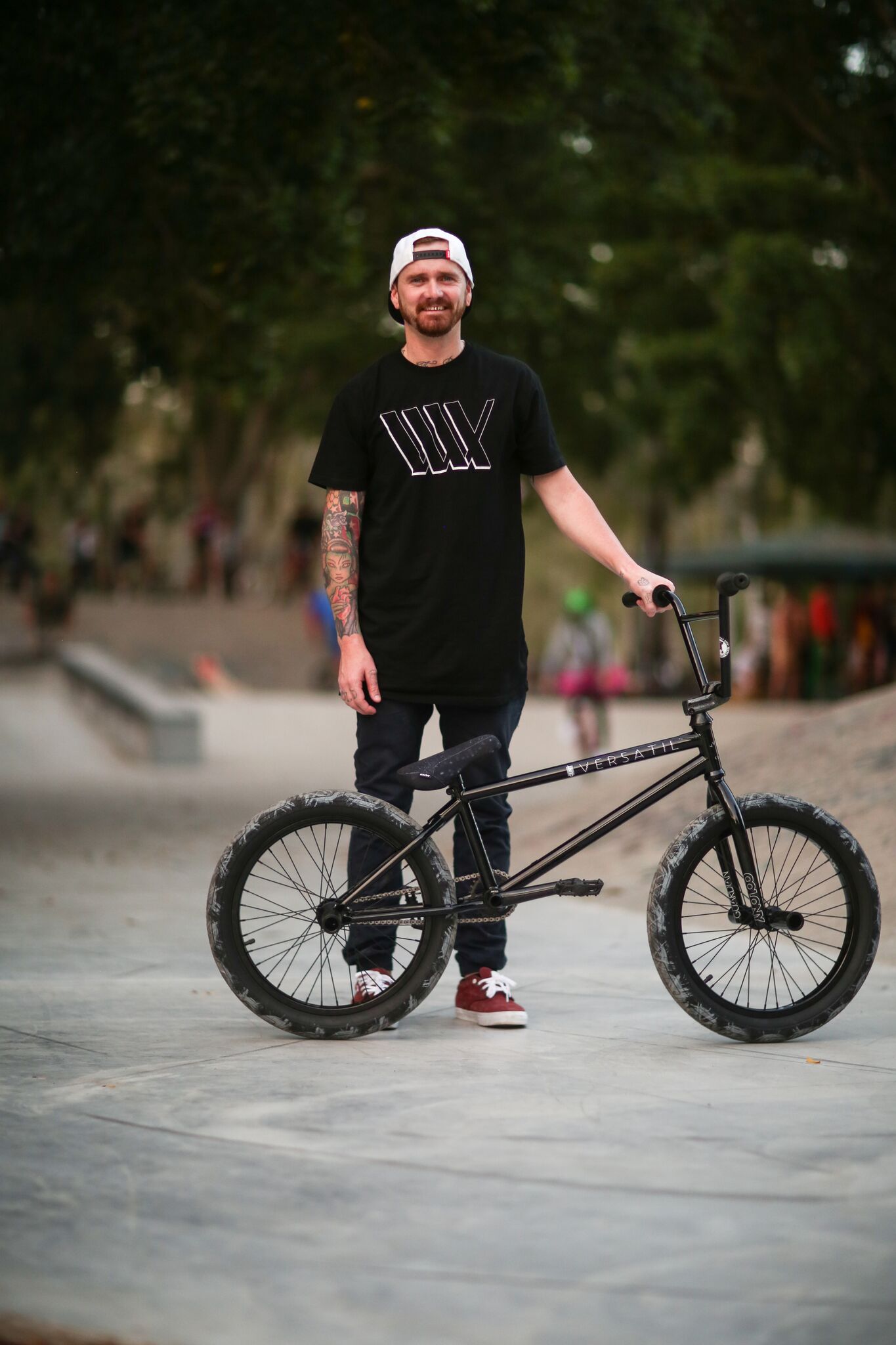 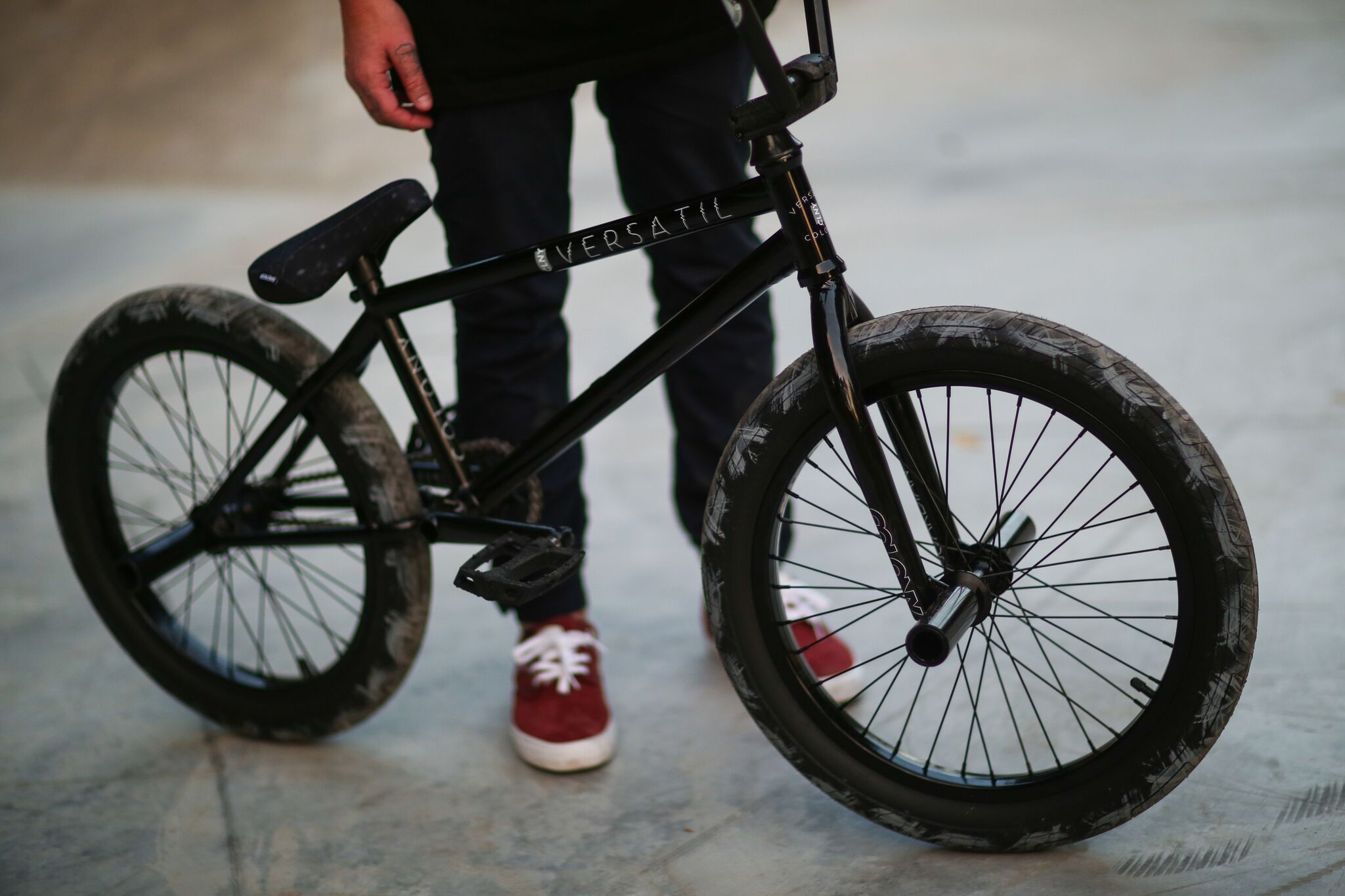 Chris Courtenay recently setup a new bike stacked with Colony product. Check the list below along with some detailed images of his rig. 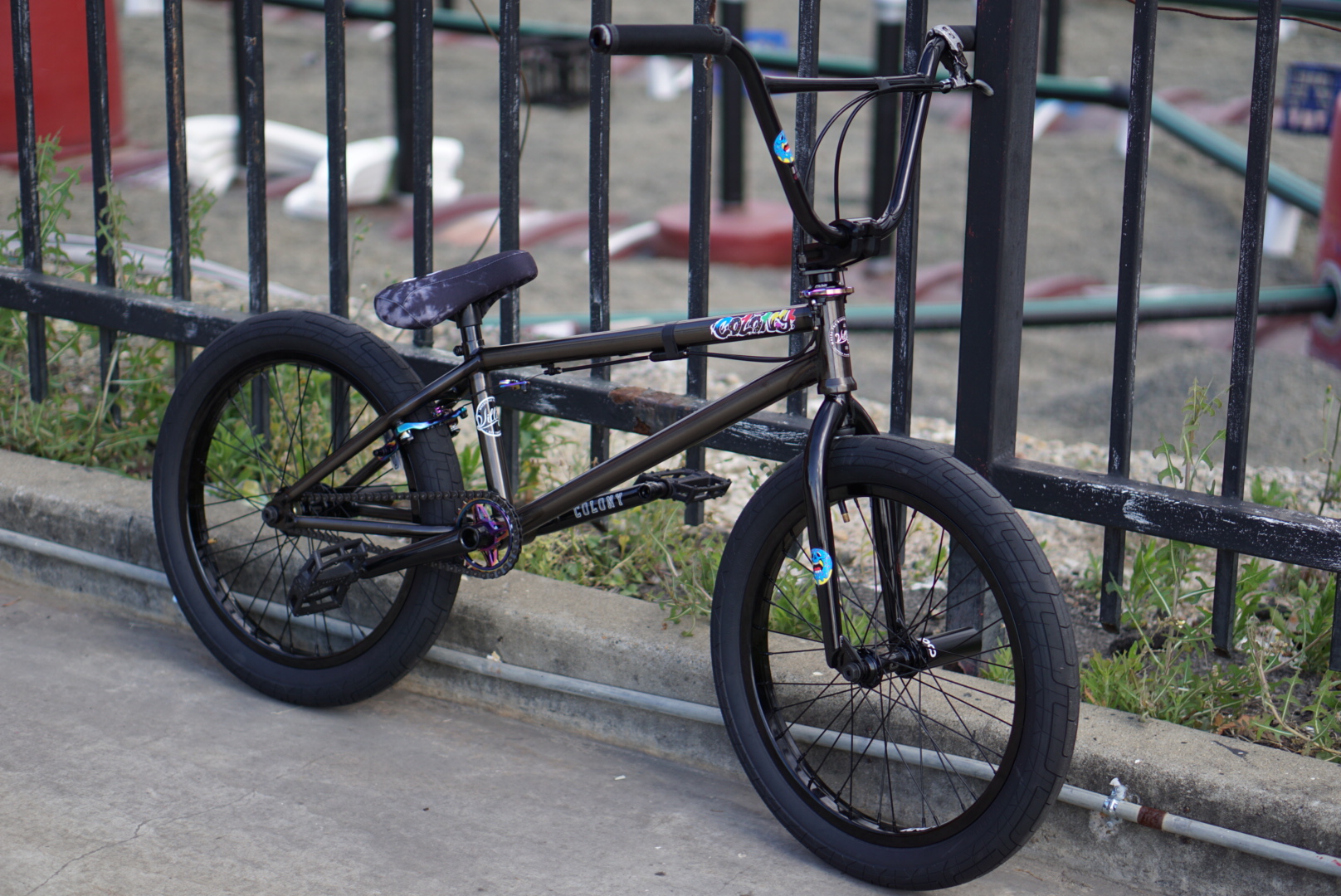 This Friday YVC are putting on a jam at the local park of Lilydale in Victoria. If you’re in the area make sure you head down, some of the team will be out having a roll for sure. It’s been little while since our products have been freely available in New Zealand but all that is about to change. We’ve appointed Pawson Reid Velo (PRV) as our sole distributor for New Zealand.

If you’re a bike shop in NZ, get ahold of the guys at PRV now to secure our latest 2017 offerings in stock now.

One of the first dealers to grab our 2017 ranges is bmx.co.nz who have picked up a solid amount of our 2017 products & is available now for purchase for all riders in NZ.

We could even see a possible Colony team trip out to NZ early in the new year. More on that soon. Victor puts together the brand new Versatil frame in his signature colour (Azure Grey) down at Epic BMX.

We sat down with J-Dogg and hit him with a bunch of questions on what’s been happening lately, moving from New Zealand and the DVD he is working on. Check it all here. Hey guys, I wanna share with you guys my busy year of 2016, with a lot of riding and contests. I come back to Brazil this year for the BSS Tour with Dreambmx, A Big series of 5 contests called @bss_tour

The contests was amazing, a lot of new places, new culture, and new emotions. First contest we end up to Santa Catarina, at the south of Brazil, the public was amazing the energy at the contest was incredible. I was so pumped to ride then that I gave 120% and end up 1st place and also won the best trick.

Then I had a little break of contests, so I decided to go chill with my friend Douglas Leite Doguete in WoodWard – PA, where I spent 1 month riding, and having the best days of my life at that paradise. Woodward rules ! After I’m back from Woodward I had only a day to rest and just get another airplane to go straight to the state of Ceará.

I had couple injuries from WW but it didn’t stop me to ride as hard as I could and end up again with 1st place and won the best trick again. Always is happy get in the number 1 podium.

No chill after that, the next day we already got a bus with at least 20 riders, we drove to the next stop, Juazeiro da Bahia. We had couple days to rest till the weekend, so the contest could start on Friday with practice.

This third contest, two of the greatest riders of south America, Daniel Dhers and Jose Maligno came to compete. It was a tough contest for myself but I did my best and got second place and I crashed on a flair double whip, but still stoked of my place.

After that we had one month of rest and riding before the fourth stop of BSS tour that was in Varginha the famous city of E.T here in Brazil, people Always see some spaceships there hahahaaha, true or lie I don’t know. This contest I had a couple of personal issues, but still rode well not the way I wanted but anyway, I still finish in second place could not be more happy about it.

After this contest I already knew that I won the Overall Bss tour in the Ranking, best thing that happened in my life … It’s a crazy feeling to win something big like this over here in Brazil, and I’m so happy about that.

The last contest and final stop of the Bss Tour I was not focus enough to do what I wanted, sometimes we have perfect days and sometimes we have a bad days, but that doesn’t mean we had to be up set or looking in the past, we need to keep our head up for the future and the new opportunities, life never stop, we need to always keep strong for what is coming.

So I’m grateful of this amazing year and opportunities of this BSS tour come in the right time.

I want to say thanks for my friends, family, sponsors and people who believed me. 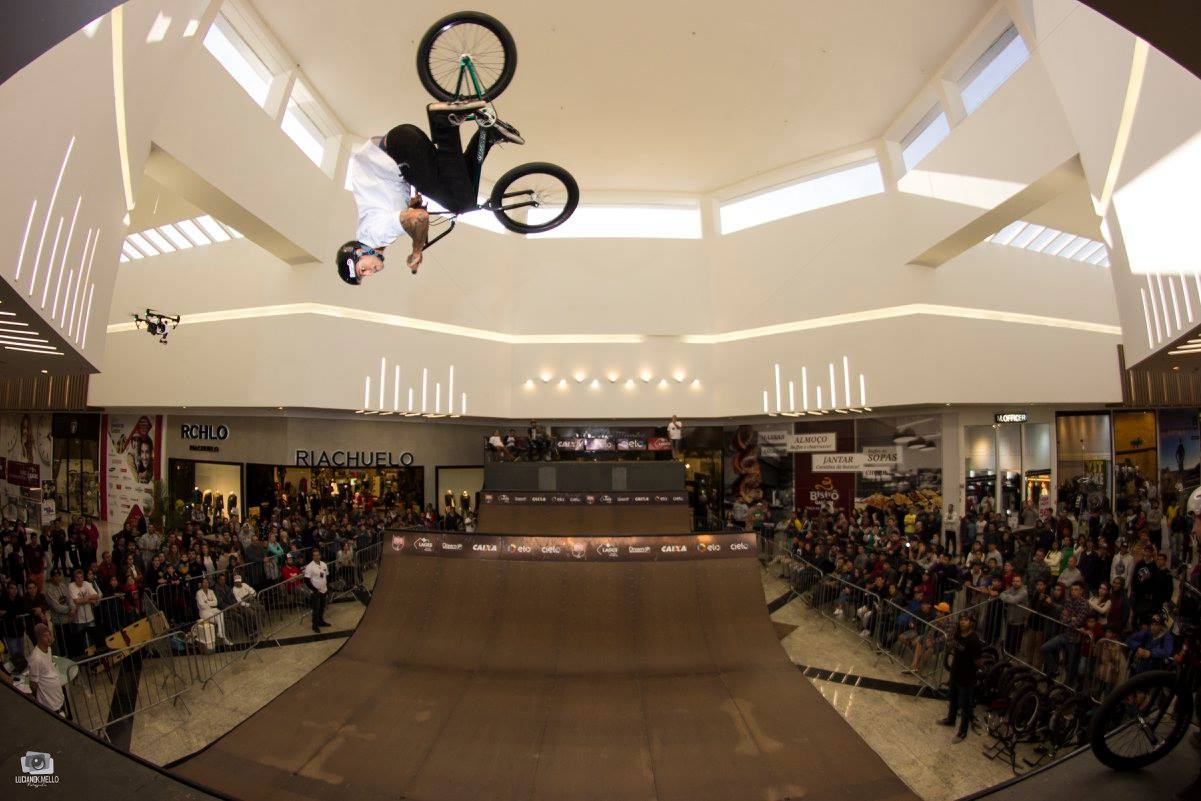 Alex built up his new 21″ Sweet Tooth bike and it looks rad! Thanks to LUX for shooting the images. 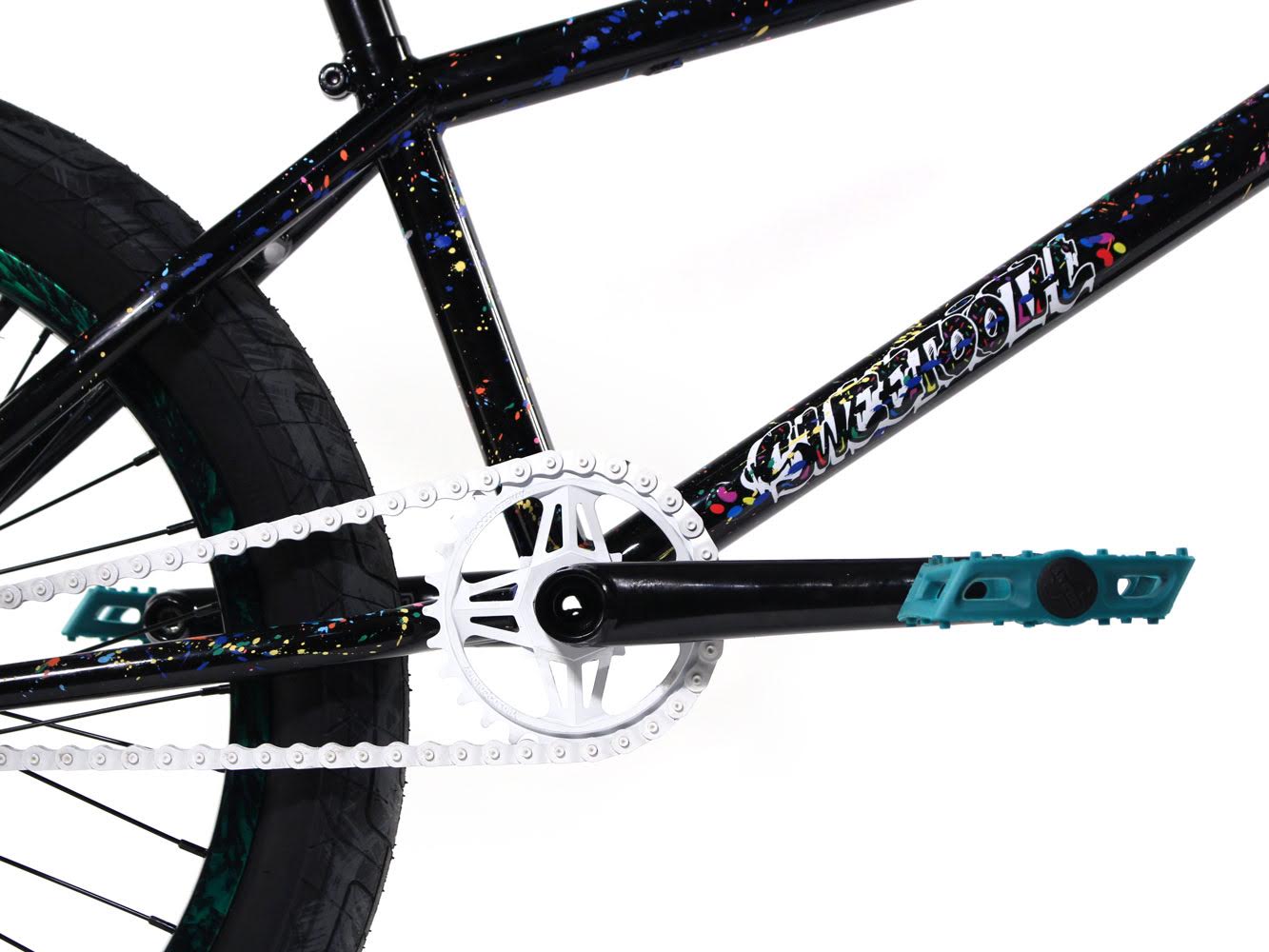 So excited to have this video out. Jack really went in for it and came out on top with one of the heaviest hitting videos you will see. Ride BMX also posted a Q&A with Jack which you can see right here.

Also checkout the out-takes video from the trip below…

Austin Zentmyer – How to tailwhip

Our friend Austin Zentmyer who reps Colony via Dans Comp gives you a run down on how to tailwhip in this new video. Good one for the newer riders or someone that’s just always wanted to learn whips.

A few of the guys spent some time in California recently stacking clips for up coming videos. We put this video together as a behind the scenes looks at the day to day happenings whilst filming a video project.

Be on the lookout for a Jack Kelly video part in a few days from this trip.

Get a good look out the 2017 version of Alex‘s signature frame. More info on all the options can be found right here.

YVC are putting on a jam at the local park of Lilydale in Victoria. If you’re in the area make sure you head down, some of the team will be out having a roll for sure.

Clint spends his 42nd birthday riding some of his local parks (and backyard) whilst documenting the riding himself.

Tim put together this video from a trip he took over to Adelaide with a good bunch of friends. Good vibes throughout.