A few of us have just started hitting the local indoor which doesn’t have to much to offer as it always has holes in the ramps after the weekend from scooter kids haha. We got a couple of shots from the other night when we had a good session though.

We have a competition coming up which is the New Zealand Xtreme games which is going to be a first for Nz since the old event X-air. I will be competing in the event for the park and possible street. The event will be on the 20-21st of October. 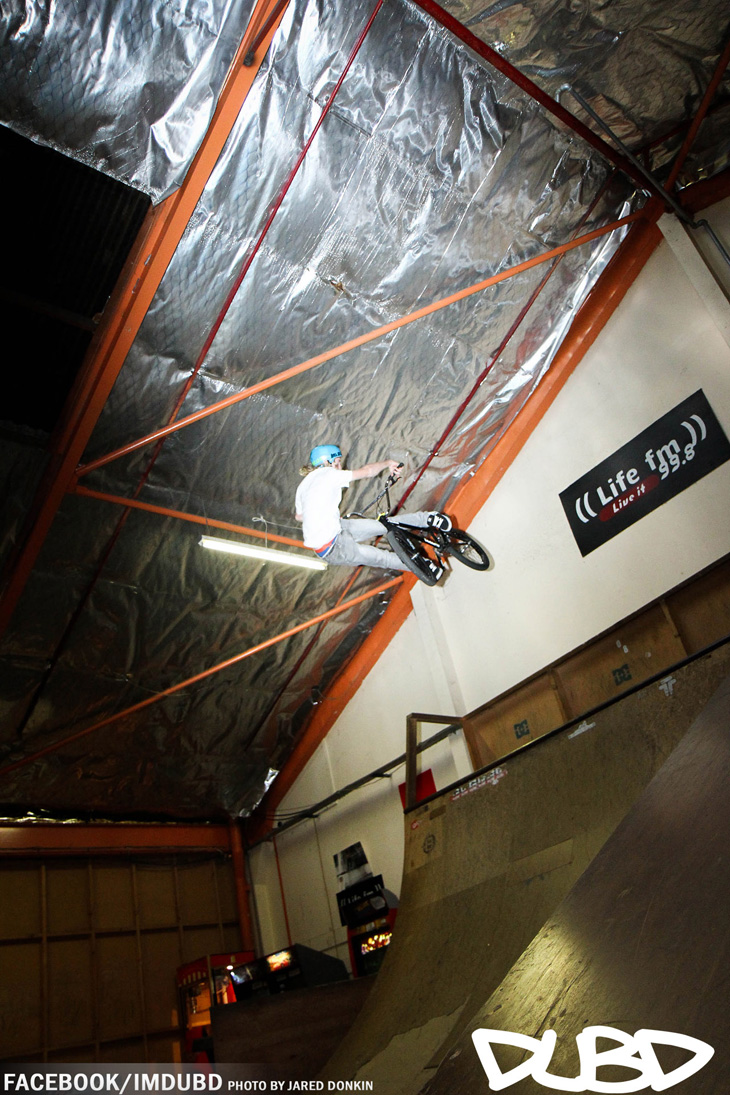 Ryan has some really great clips in this road trip video he went on with the rest of the Monster team.

We are very excited for this and hope to see everyone out at the stops! Don’t forget to #colonybmxuk on Instagram so we can see your photos from hanging out with us all aswell. 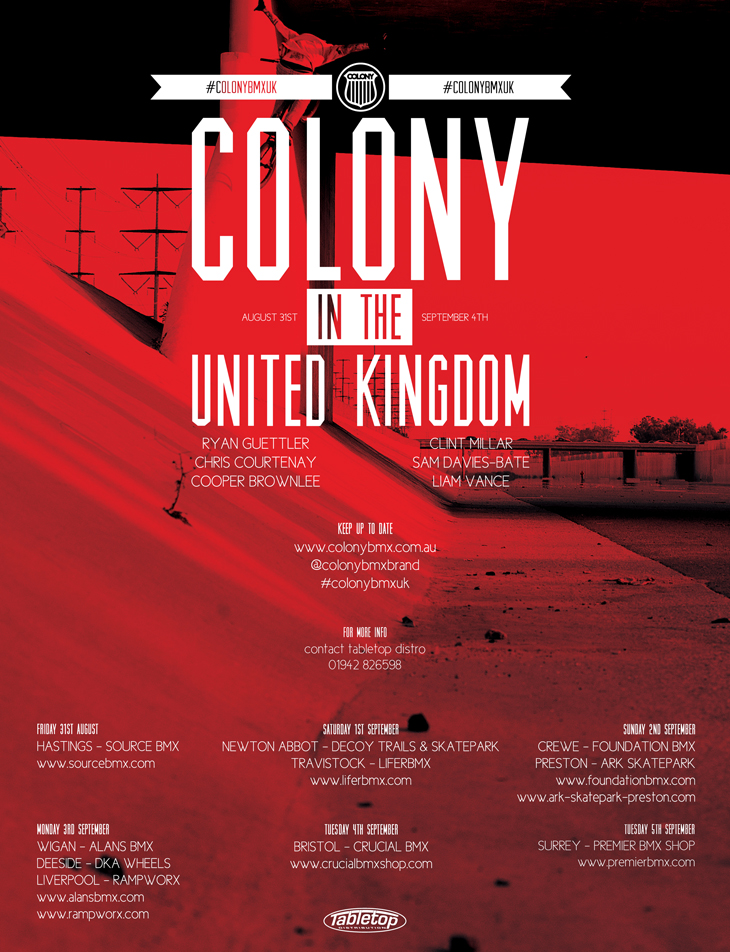 I found these pics while going through some older files & thought I would share them. These are of the actual molds used to produce our Much Room Grips which are available now worldwide at any Colony dealer in range of colours. 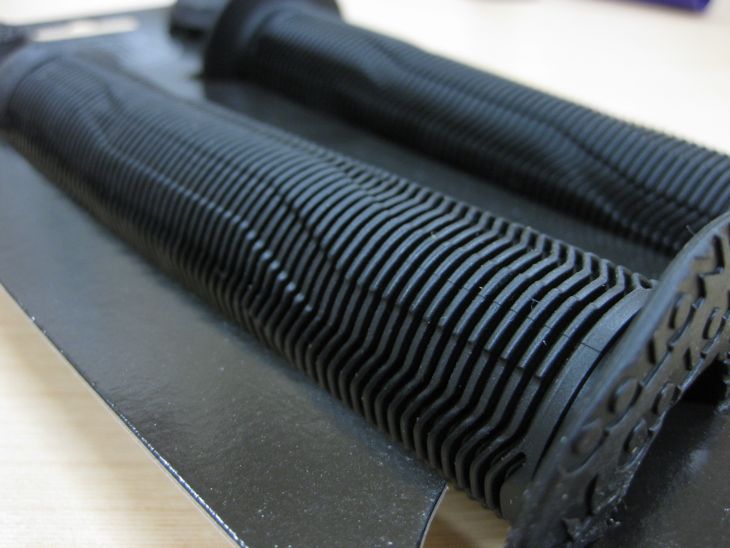 Anton recently hit us up that he has taken up an offer to ride for another another company. Anton was only with us for a short time but we thank him for his efforts while riding for us. We wish you all the best & we will be watching your career take fold. Good luck mate in your new ventures & keep shredding. Alex sent through a couple photos of his new bike setup. Thanks to Haiden McGrath for the photos. 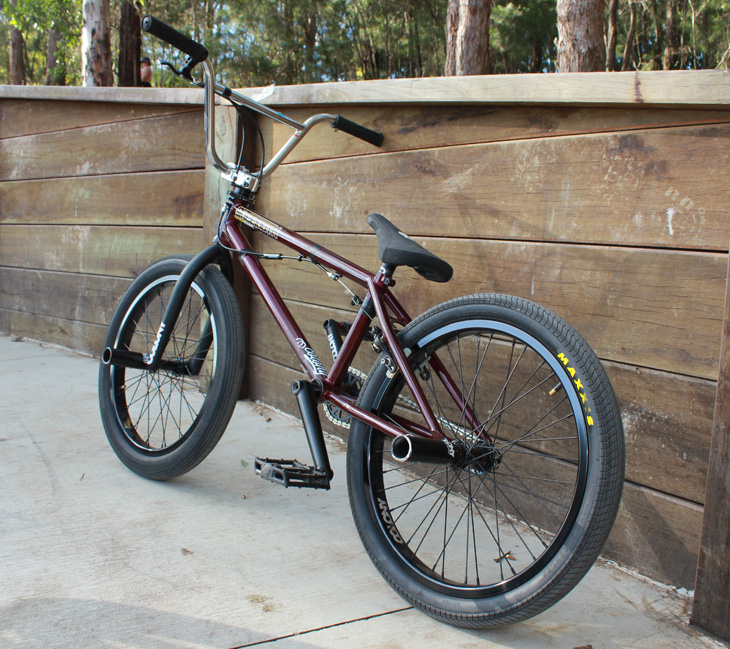 Ryan has some good clips in this edit from the Vans LXVI Invitational contest.

A quick one with Chris from a session he had at the Shed park in Melbourne last week. Put together by Matt Whyatt.

Bruno video in the works

Bruno sent through this teaser photo for an edit his is currently working on over in France. Alex spent 6 days last week in Melbourne filming for his next web video which trust me is going to be insane! Here are a few random shots from the trip. Follow us on Instagram aswell to keep up to date on trip happenings and all sorts of random stuff. @colonybmxbrand Marnold put in work at the Rampit indoor park in Melbourne a few weeks ago, check it out.

Over on RideBMX, Alex gives you a run down of his signature frame the Sweet Tooth. Chris Courtenay’s signature CC Sprocket has been out for a little while now & it’s one of our more popular products out right now. With extensive CNC machining for a unique look, it has quite the following. Available now at any Colony dealer on the planet. The latest Canadian Concrete comp went down & once our boy Brandon Van Dulken cleaned up. Yew !! Thanks to the guys at Kill Em All Distribution for putting these fine events on.

Here is a teaser clip from the birthday boy himself, Alex Hiam. This is for his new edit he has been working on with Cooper for a few months now. Yew !!

Nothing to do with BMX but…

This is pretty awesome. VW documentary about the Cal-Look VW scene. You gotta appreciate this no matter who you are.

Our canadian team rider, Brandon Van Dulken talks you through the Colony Guardian forks along with some riding clips in the mix.

To celebrate here is a his first ever advert with Colony back in 2009 when he was only 13 years old. Happy birthday mate !! 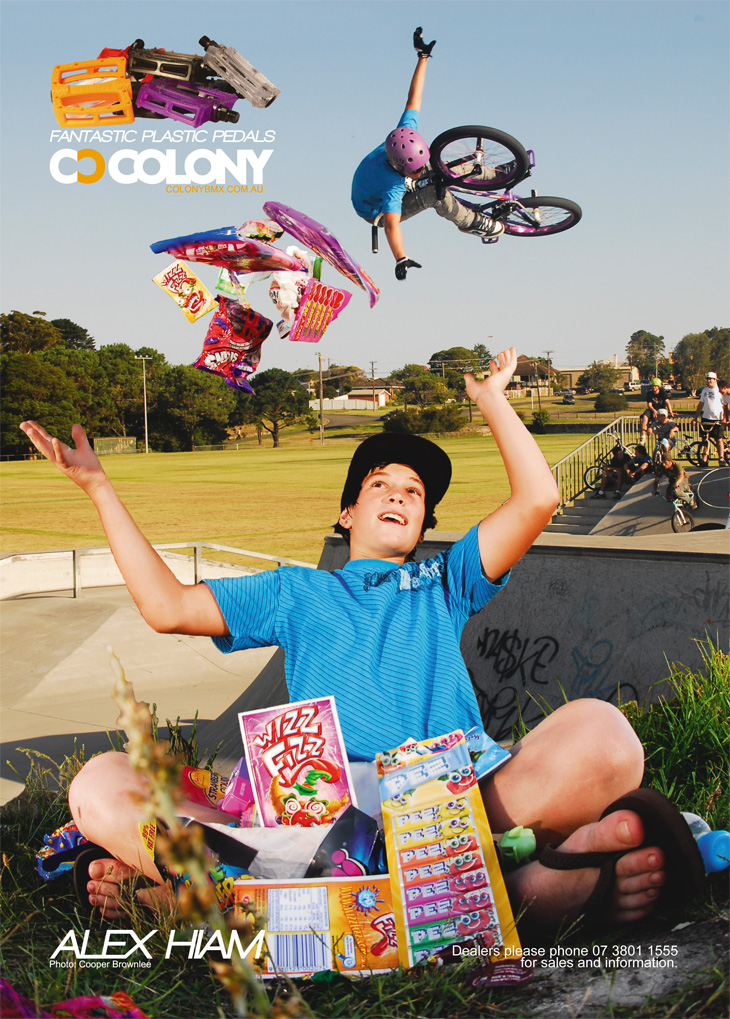 Paddy Gross sent through a photo of his current setup… 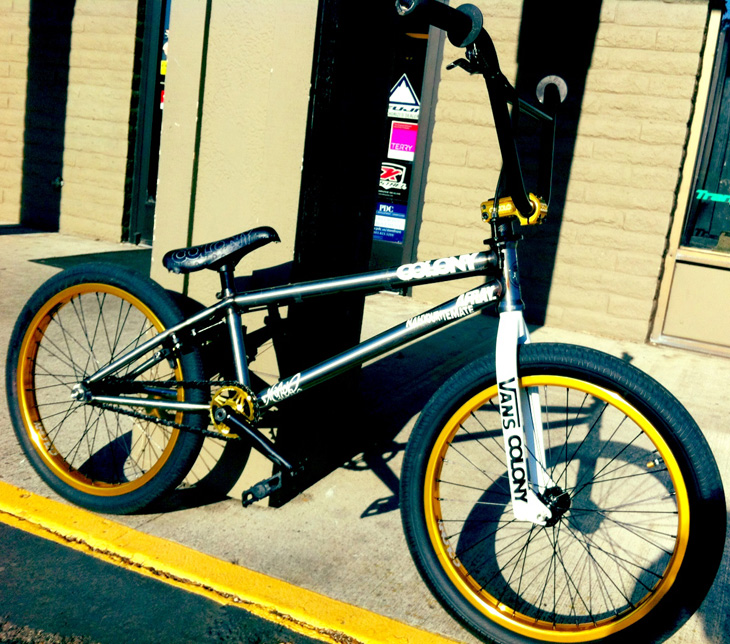 The next event in the 2012 Canadian Concrete Series is set for September 2nd at Chuck Bailey Park in Surrey. If you are in the area get yourself along for a great day on the bike.

Check the flyer for more details & on the events scheduled after this one. You can also check their website by clicking here now. Over on Weareorangejuice Marnold has a 25 most played songs feature, check it out here. 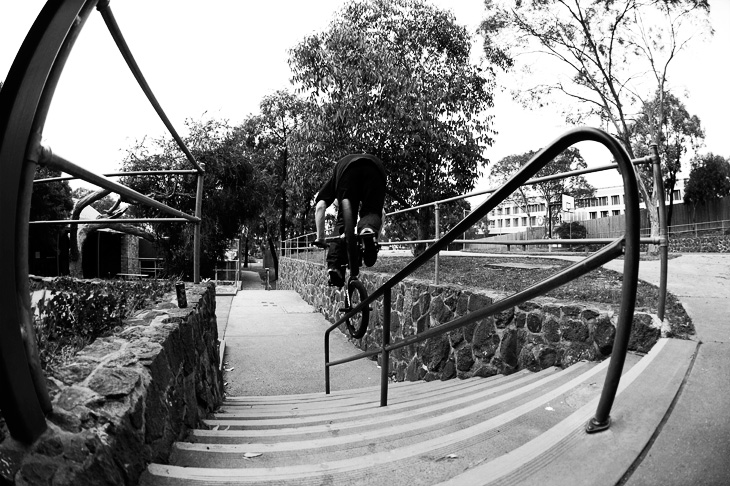 A bit of a story from Mr Bayzand about the following photo, well worth the read…

I knew of this ledge from last time I was here so I got the lads to take me there one day when we were riding down town. As is turns out they were doing alot of construction there and it was all fenced of and they had put skate stoppers on the ledge. But this ledge was way to perfect to just say oh well and walk away. We sussed out what tools we would need and planed to come back.

So a few days later I met up with the lads later in the afternoon and we missioned it back to the ledge. We stealth in there and start to get to work, we remove all the normal skate stoppers that were on the ledge but then there was this massive bracket screwed to the end of the ledge with a pole welded to it sticking up at the end. We tried undoing the Allen key bolts but there was no way they were budging we would of broke the Allen key way before we could ever crack the seal of the paint. So our efforts to get the ledge rideable had been shut down again.

I was determined to get this clip so we start hitting it with the peg on the bike but it was way to loud, we try using big rocks, kicking it, anything we could think of but still to no avail. Once again I was shattered. We all sit down and chill thinking “well we tried everything but it’s not going to happen”.I couldn’t sit still as I really wanted this clip so I started walking around the building site just looking for something, anything to use. After a while of hopeless searching I stumbled upon a peace of aluminum pipe, I got so exited and ran back to the ledge. I put the pipe over the pole at the end and started trying to leaver it off it wasn’t really working because the stopper was stronger then the pipe we had.

But then all of a sudden the top weld started to crack we all got real exited and everyone got on the end of the pipe and we eventually ripped the pole right off the brackets it was welded to. It was a miracle. I then cut the wire ties of the fence and managed to move it just out the way. so now to our surprise the ledge was rideable.

At this point we had been there for a while so we quickly set up the cameras and were like “lets get this shit quickly before anything else happens”. I had a couple run ups at the ledge to suss it out and I was ready to go. I give the “yep ready bruv? Lets do this” and take off and just as I was about to hop on the ledge a security guard appears at the bottom of the ledge with this shocked and confused look on his face. My heart dropped, after all this work we finally get it rideable then security rock up that would be right! But we put way to much work in to walk away now. I go back to the run up and say “boys lets just do it” I jump on the ledge, slide it but my foot slipped off at the bottom. I grab my bike and as I run back up the stairs the security guard is trying to stop us but is all so dumbfounded at the same time. I jump back on the ledge, slide it perfect, right off the end with the security guard still standing at the bottom scratching his head trying to process what just happened.

We all run off laughing ecstatic at what just happened, it was a epic mission and a perfect example of why I love BMX and especially street riding so much, the situations and the lengths we go through to get a clip. I hope you enjoyed my story and it inspires you to go out and get shit down and don’t let anything stand in your way. If you want something, make it happen.

Paddy has some banger clips at the end of this jam video hosted by Goods Bmx in Portland.

We have just landed in Australia a fresh new batch of our ever popular 1st Base tee shirt into stock. This time in two new colours – Asphalt & Athletic Grey. Check them out here now & they will be available at Colony dealers Australia wide next week. 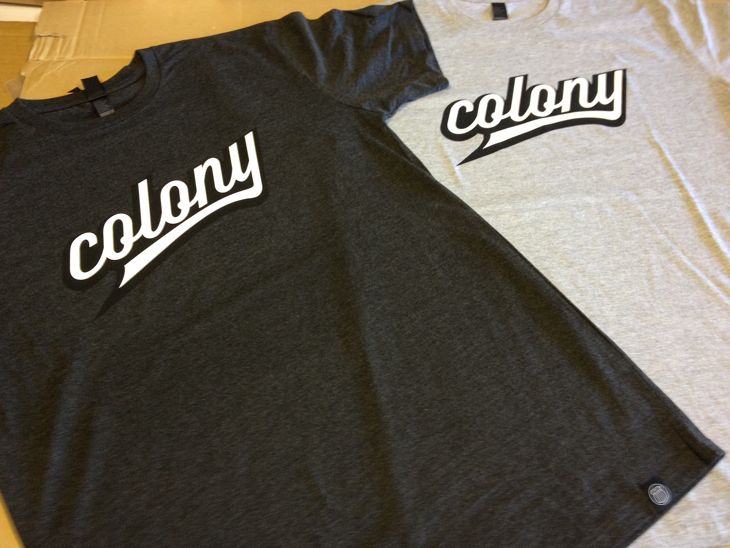 I went to NYC for a little holiday the other day with my friend Kiera It was crazy, I had never been before so just wanted to check it out. It was an awesome time, sight seeing and just riding around. I got to see a lot of pretty cool street and one rad looking park, but got kicked out before we even got in. I hate skate only parks. I’m now back in Canada for three more weeks and then heading back home to Oz. 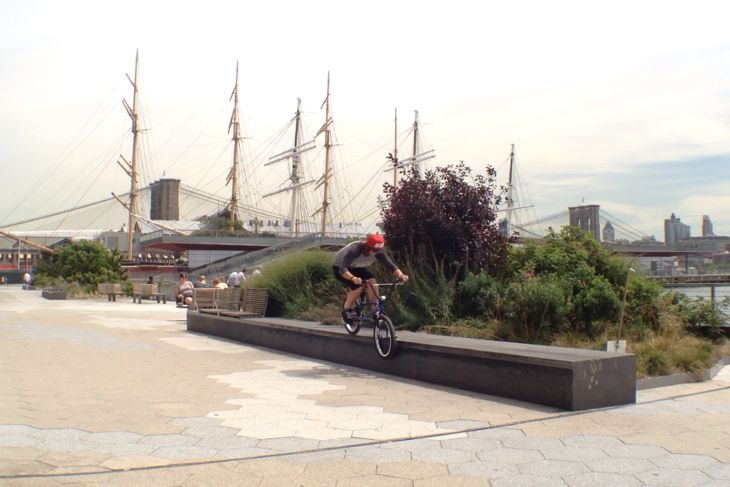 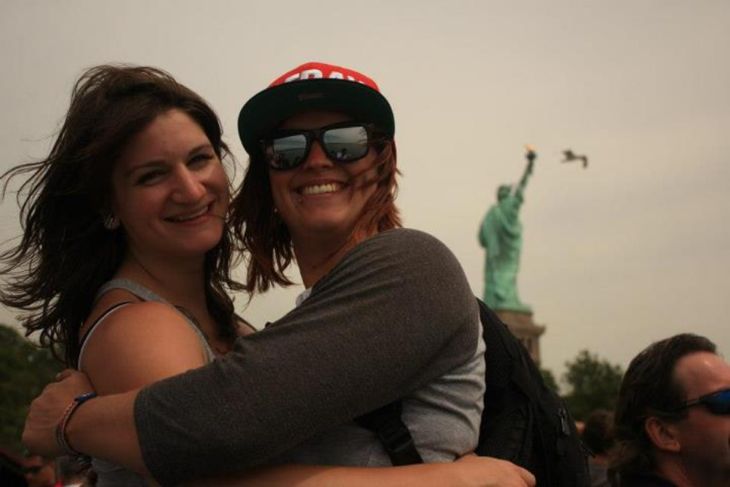 Sneak peek of our Freecoaster in LHD female axle version with hubguard. Out December this year. 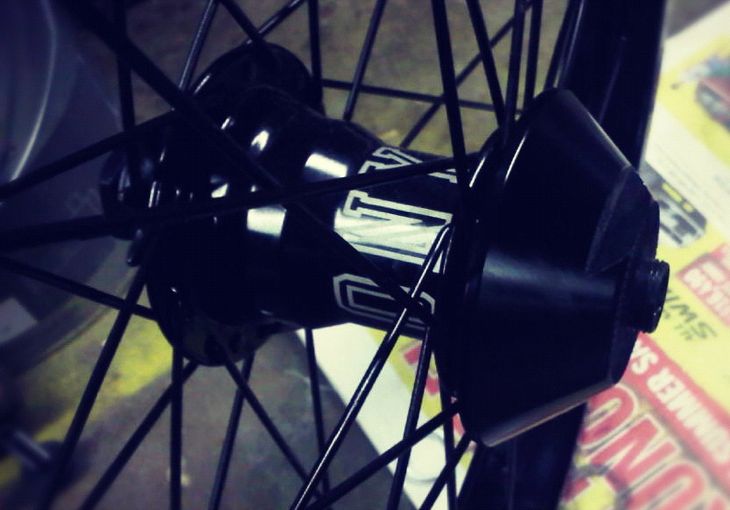 We are stoked to have this done, plenty of details showing all the 2013 products and colours along with some good riding photos from some of the team.

Depending on what country you are in but these are available now in Australia with the USA & the UK receiving their shipments in the next week or two. Other countries to follow very soon as well.

This Sunday the 19th of August, there is a comp on at the Mount Tamborine park to raise awareness for the planned new park up there. We threw the boys some prizes for the BMX portion, so if you’re keen get up there for a fun day out. We are very excited to be heading over the the United Kingdom for a week! Myself, Ryan Guettler, Chris Courtenay and Clint Millar will be over there hitting up some shops and riding parks along with Anton McGuirk, Sam Davies-Bate and Liam Vance. Thanks to Tabletop for helping out with the trip. Make sure you get out and come say hi at one of the stops or if you see us at your local park. We also want to get everyone involved so if you use Instagram, take some photos whilst you are out and about with us and #colonybmxuk so we can see them all. No doubt we will have plenty of giveaways for riders along the way aswell. 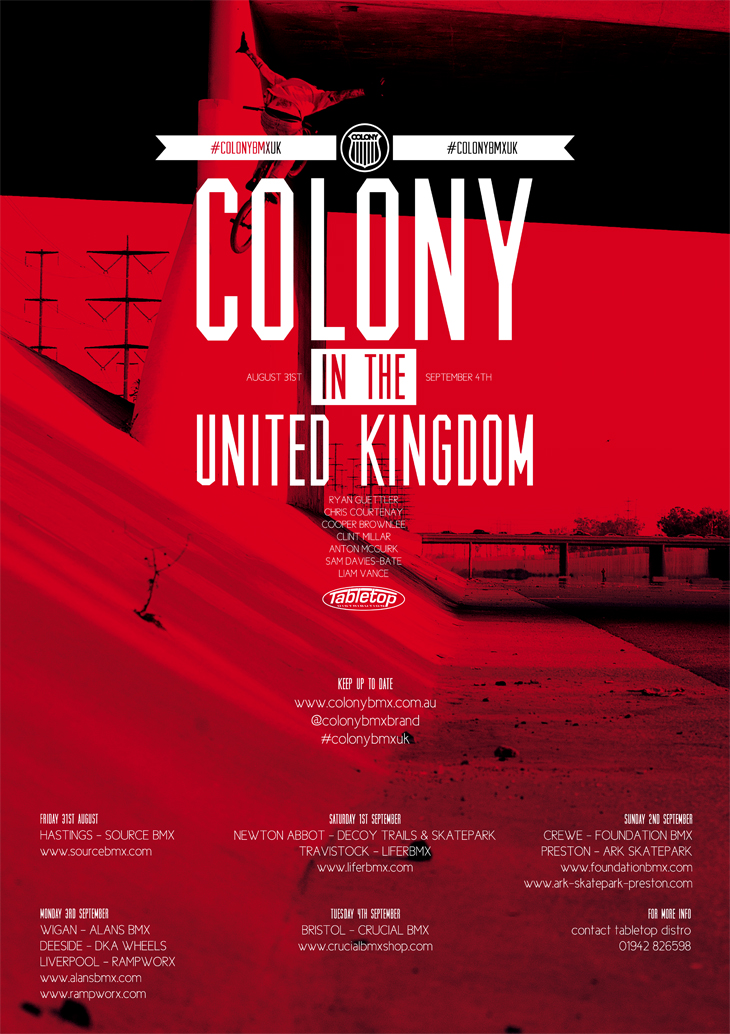 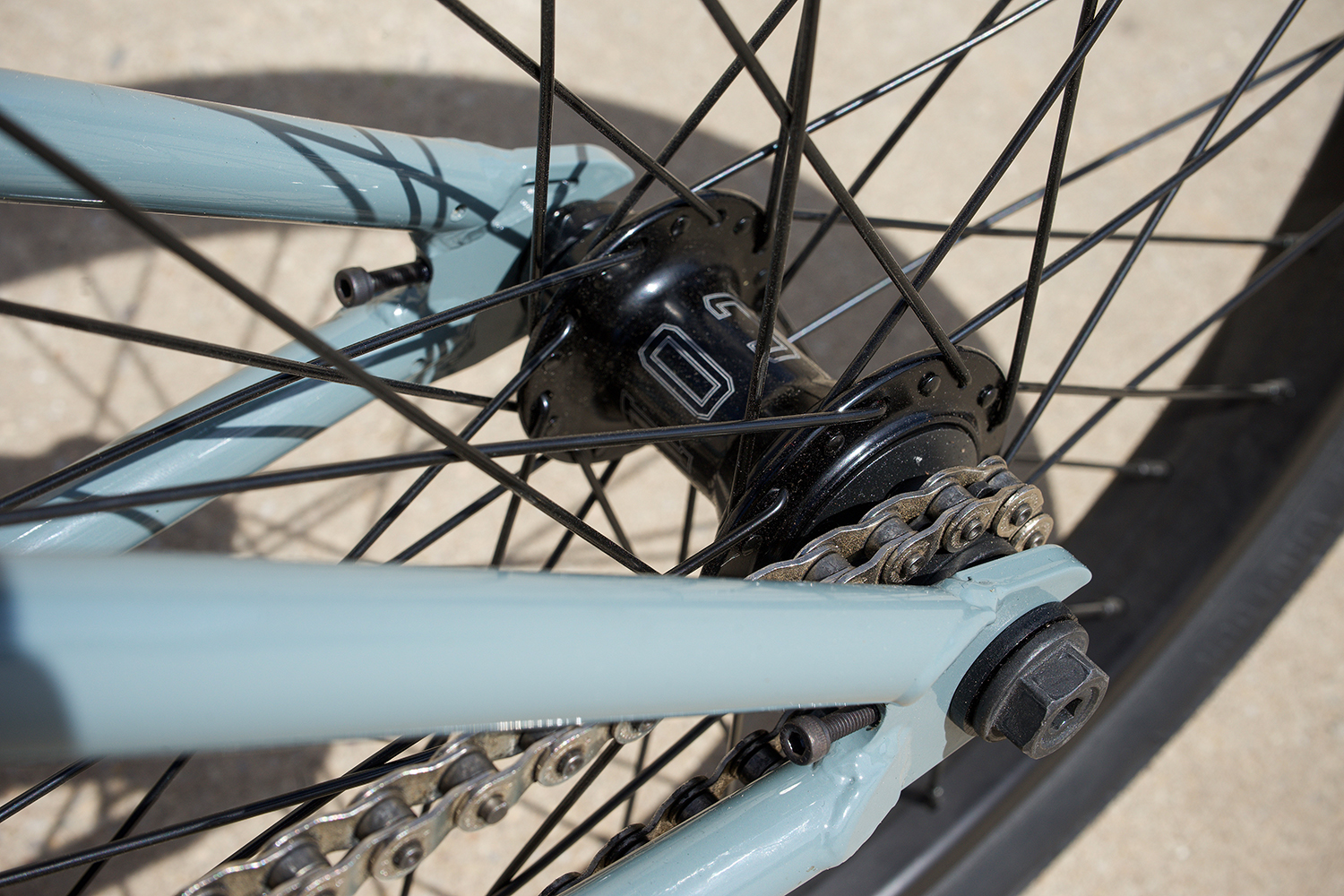