Shane Badman sent in an email with a few pics of what he has bene up to of late. Read on below…

The harsh northern winters of Europe arn’t great for riding. Living in Sweden is awesome but with snow becoming an all too familiar sight & the temperature currently around -12C during the day sometimes you gotta make the big call. So 4 airports, 3 flights & 22 hours in the air later I landed back in Australia to warm summer weather & white sandy beaches. Word.

It was a great being back in Aus. Coming back to visit never leaves you with as much time as you’d like, but we were still able to get to Melbourne for a Jam that was put on by a bunch of the locals – big thanks goes out to Paul Chamberlain & crew for putting it all together. While in Melbs I also managed to hook up with world renowned photographer Chris Polack for a shoot. Getting the job done at Imax & down at St Kilda was great with an impromptu demo going down for the locals at the beach – look for upcoming shots in future issues of Rebelyell!

So I’m back in Sweden now riding in my warehouse that I have for the winter. I’m taking care of a few projects & also planning for some of this years trips – stay tuned for further updates! 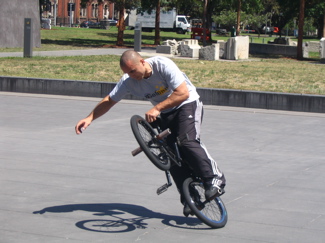