We went through Bundaberg today and had to stop at the Bundy Rum Distillery for Millar cause it’s his favourite drink. We wanted to get a shot with the Bear but he was hibernating so we got one with the giant bottle instead. This is what happens kids when you drink too many Bundys! Hope you enjoy Millar… I sure did.

Mick is currently travelling around Australia, I will let him tell you the story though…

“Hey! This is Mick here checking in. After the DVD launch in Brissy I packed up my life in Melbourne and hit the road with my girlfriend to show her around Australia before she heads home to Canada. We rented a van to sleep, cook, and do pretty much everything in. First stop was Byron Bay where we explored the beautiful beach and hiked up to the lighthouse. I abandoned my shoes and became a barefoot bushman. We had mad adventures exploring the bush. We then kept moving until we arrived at the Glass House Mountains and spent the day at Steve Irwin’s Australia Zoo. Turned out to be Bindi’s 13th birthday, so we got to see some crazy croc shows with the whole family. I even got a piece of her birthday cake! Next stop we came to Noosa where we explored the mangroves and the river by kayak. We spent a few hours on a deserted island where we hung out and I had a stab at spear fishing. We got out of there quickly after our car was broken into and made our way to Rainbow Beach. Now we’re here for a few days exploring the sand dunes and hiking through the National Parks. This is such a chill place I almost don’t want to leave. The plan is to head up the East Coast until Cairns. I’ll keep you posted with anymore wild adventures we come across. Peace.” 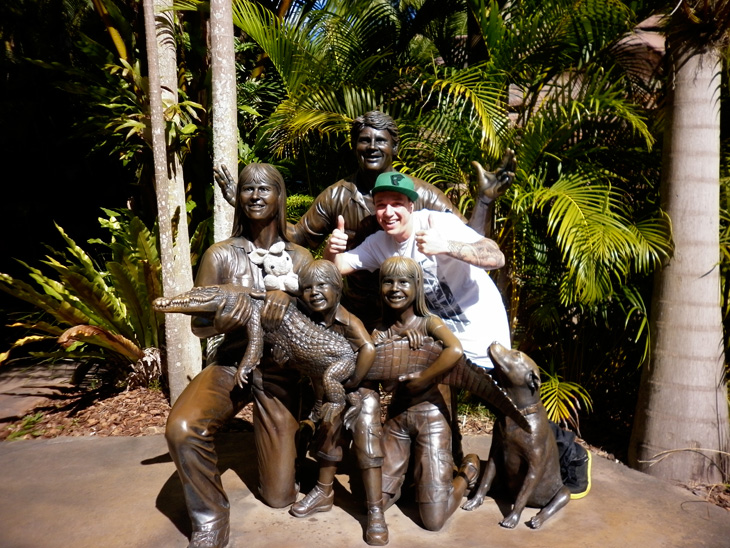 In conjunction with The Come Up we bring you a series of interviews with some of the team about their experiences filming for the DVD.

Starting today with Mick Bayzand there will be a new interview dropped each day over the next week leading up to the 16th of July. Hopefully you will get a bit of an insight into what went into the DVD & what to expect from the guys. The riding footage used in all these interviews is B roll footage that did not make the actual finished product.

The Colony DVD will be available worldwide from July 16th.

One Love One Life

Among the million things he already has on his plate, Cooper Brownlee runs a lifestyle photography website called One Love One Life. Check it out by clicking here now. 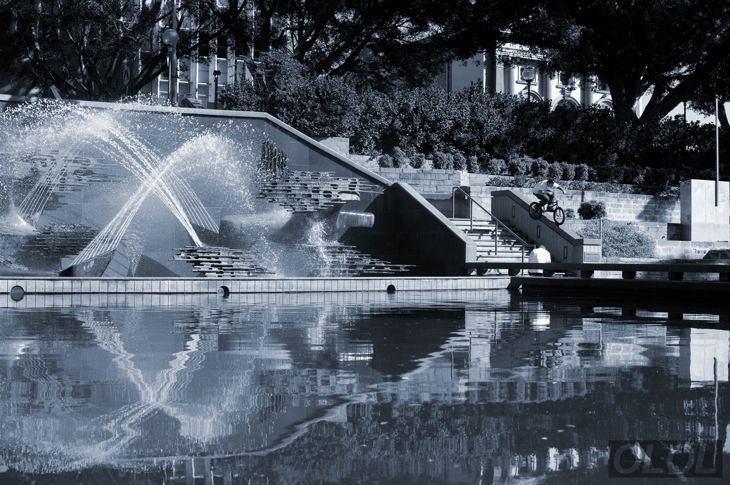 Mick Bayzand with a feeble in Newcastle, NSW.

Mick Bayzand & his good mate Kym Grosser feature in this Blazeguard edit jibbing at their local park in Melbourne. Here is our current RideUS advert that came out a couple weeks ago advertising the Teddy frame. Mick Bayzand downhill runup, over grind in LA back in September of last year… 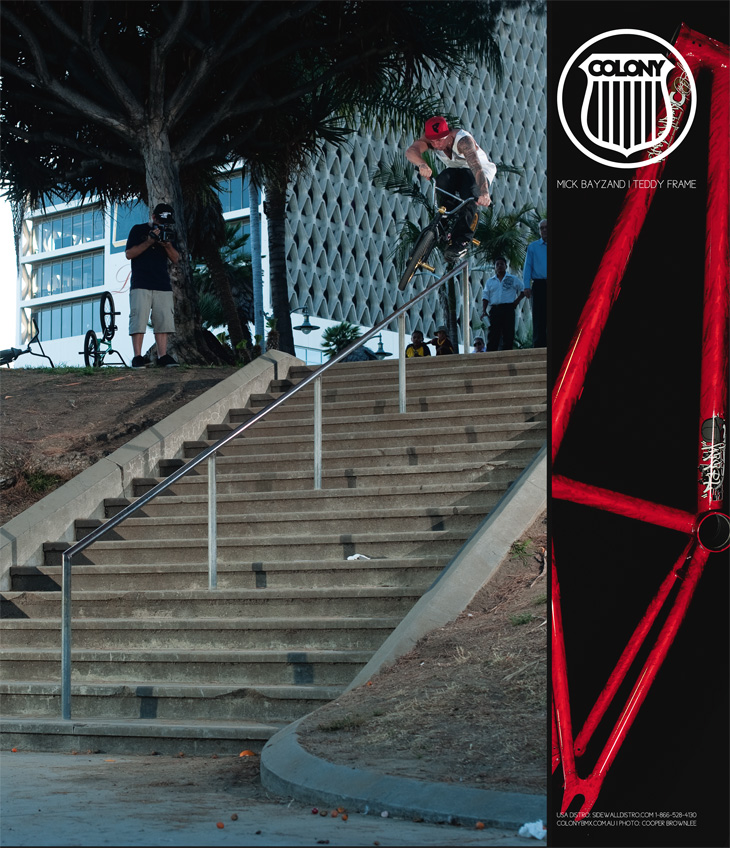 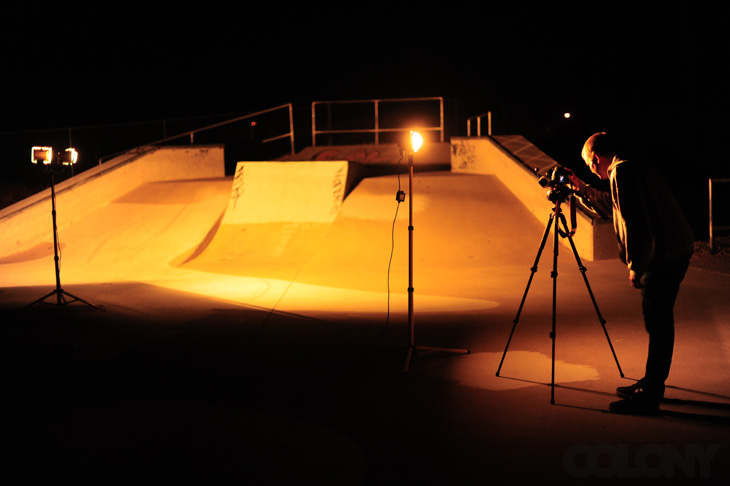 A couple of days ago we went out filming but it rained all day! So we missioned over to a warehouse spot that we new of and had a really fun ride for a solid 4 hours. This winter my friends, don’t let the rain stop you, just keep searching… 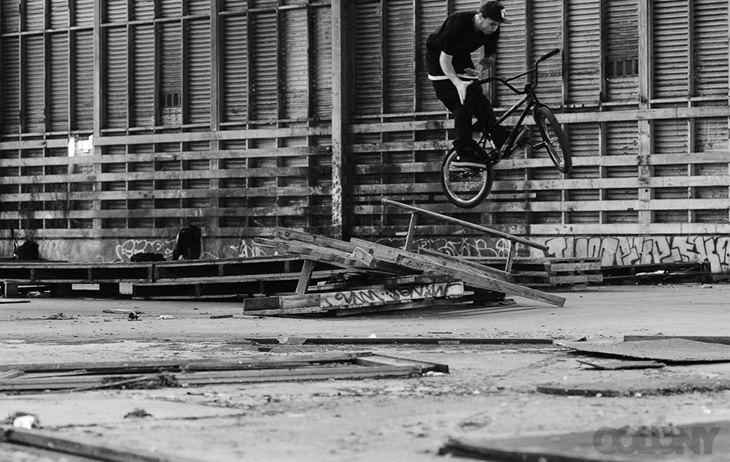 We teamed up with the guys over at Strictly BMX to bring you some worldwide exclusive limited edition Teddy frames. There are only ten of these puppies available in the Translucent Blue so you better be quick. Each of them have a custom sticker job by the main man himself, Mick Bayzand. Click here to get yourself one sooner rather than later as they wont last long. Myself, Marnold, Tom and Mick arrived in Perth yesterday and we went down to the local BMX store, Royal BMX and hung out for a few hours. None of us have been over here before and it was definately a treat to hang out with Ben and everyone down at the store. Thanks to everyone who came down, it’s awesome to see another legit BMX store in this country. 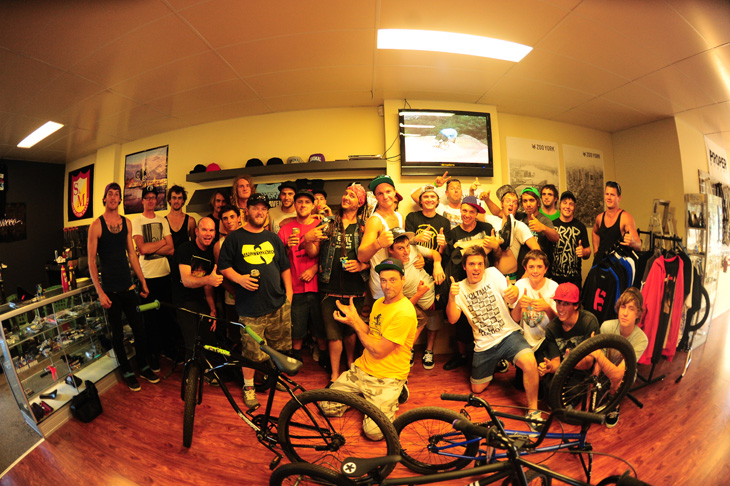 Photo below of Mick Bayzand for no other reason than he rules & does rails like this better than anyone. This was taken back in October 2007 on our first USA team trip. Thanks to Fudger & the amazing Uni in Athens, GA. 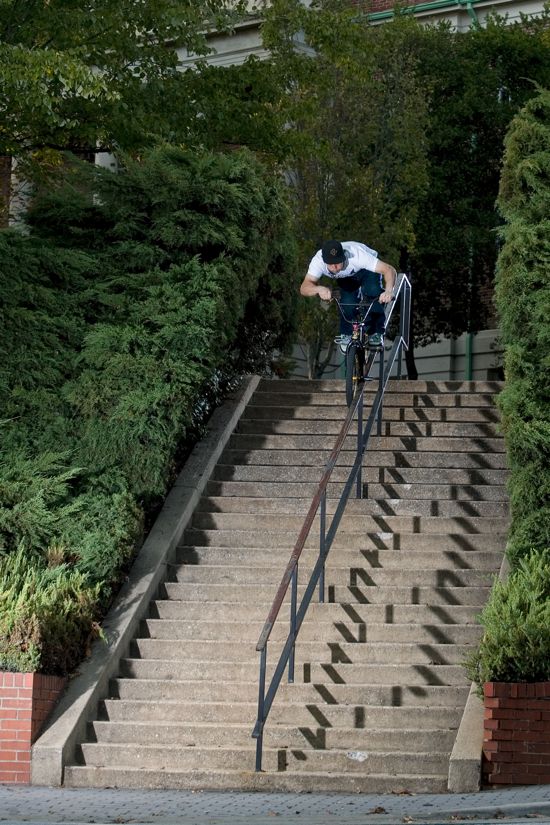 All the boys got into town last night & we’re all itching to go ride but the rain is a real pain. Hanging in the office this morning doing bike maintenance & talking smack. Hopefully it clears up soon.

Don’t forget the Crossley Cycles in store tomorrow at 3pm. See you all there. We just got to Brisbane, it was a long drive! We had rain most the time but we did get a chance to hit up a couple of spots which was fun, just like this Swansea park in NSW that was just finished and super super fun! 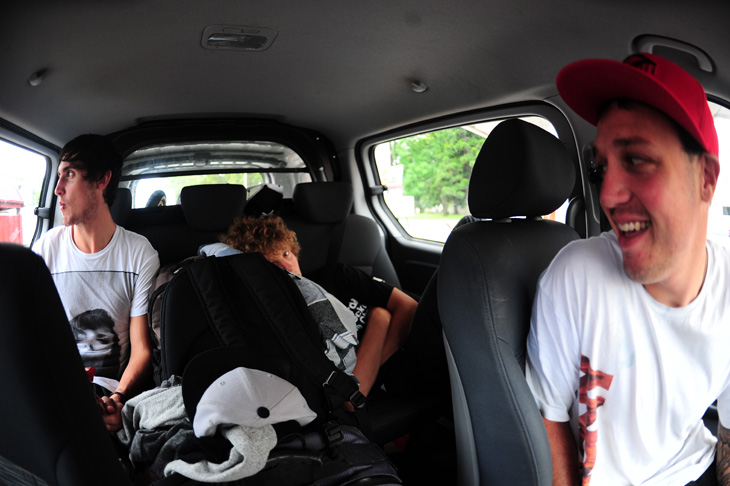 Update from the road…

Cooper, Zac, Mick & Liam are almost in Brisbane now on their trip. Here is a photo of Coops before the rain hit in Sydney. So myself, Mick Bayzand and Liam Zingbergs are in Sydney at the moment trying to film some clips, the weather isn’t on our side but Liam did manage to get some solids at this spot before the rain hit us… 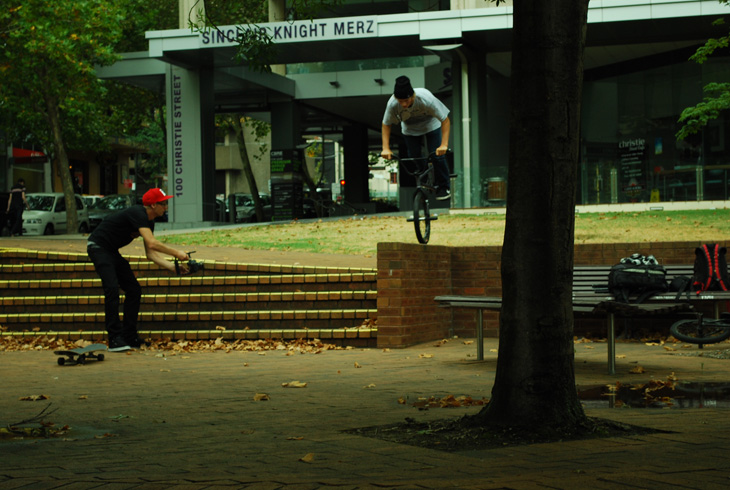 Cooper, Mick & Liam hit the road yesterday on their way from Melbourne to Brisbane via Sydney. Zac will also be meeting up with the guys Sunday morning for the last leg up here. They’re all coming up here to hang for a week then we all head back down to Sydney then Canberra the week after. Should be fun times.

Make sure to come along & say g’day at one of our store appearances scheduled over the next few weeks. They start this Thursday at Crossley Cycles then Friday at Helensvale BMX.

Cooper will be posting updates on our facebook page so make sure you’re a friend of us by clicking here now. Over on the BMX Union site there is a full length interview with Mick Bayzand. It’s a pretty good read with some interesting facts from the rail king himself. Check it out by clicking here now. Thanks to Kurt for hooking it up as well. Found this random photo from last year’s Nora Cup & thought I would share with you all. Thanks to Ride BMX for hooking us up big time that night, good times. Later next month, almost the entire team will be meeting up in Brisbane to ride for a few days then head back down south making our way to the BMX Games scheduled for February 25th, 26th & 27th in Canberra.

Along the way we will be dropping into some select Colony dealers with a bunch of giveaways, signings & a bunny hop comp open for all to enter. So come along & meet the guys at your favourite shop shown below. Mick Bayzand’s signature frame & bars are the choice of many of our team & for good reason. They have all the right dimensions plus Mick is a badass. Plain & simple. Check them out by clicking here & here now.

Mick has been chilling out in holiday mode like most of us this time of the year. Here are a few snaps of him hanging out with some other fellow Aussies mates. When you can bomb any rail in sight & have been doing it for as long as anyone can remember, then you deserve your own signature frame. Especially if your name is Mick Bayzand. Mick has been a staple part of the team for more than a few years now & is always putting himself on the line doing what he loves. Mick’s frame, the Teddy handles this abuse with ease & is one of our more popular frame choices of the team. Check it out by clicking here now or at a Colony dealer near you now.

Zac Miner sent over a few photos from the USA trip we took a couple of months ago. Zac stayed on over there for a couple weeks after most of us left. He was stoked on these photos as they all remind him of good stories from the trip. It’s summer, everyone should be out road tripping! 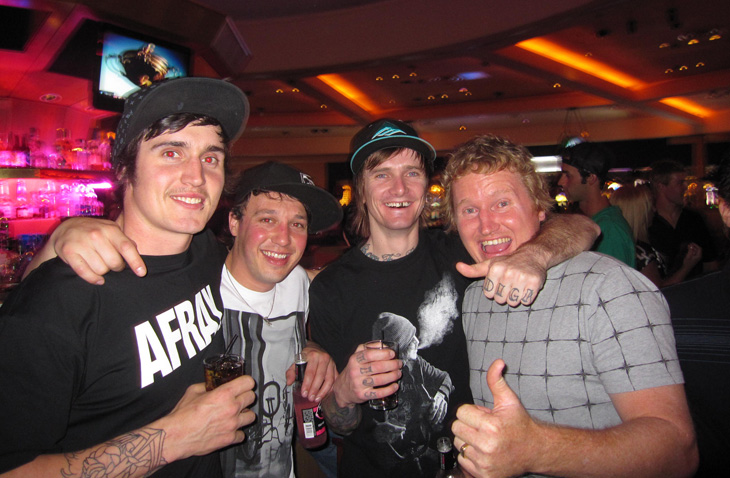 Doing limited edition stuff is something I really dig, you may have seen these already but here is a video on the process of Mick Bazyand sticker bombin the 10 limited colourway Teddy frames that Strictly BMX have out now.

I posted up some old photos I had shot from the years before digital cameras came around over on focalpoint, included in the photos is this one of Mick Bayzand slaying a rail a good six years ago. This was actually the first time Mick and I rode street together back when he had recently moved to Melbourne. If you wanted to see some more photos check here. 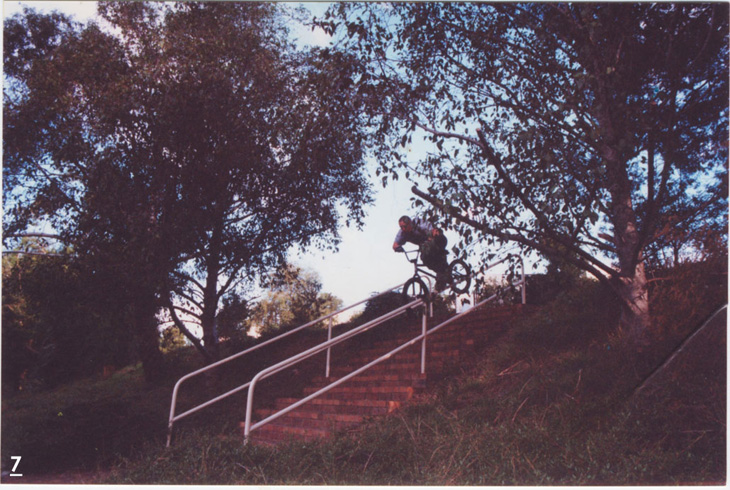